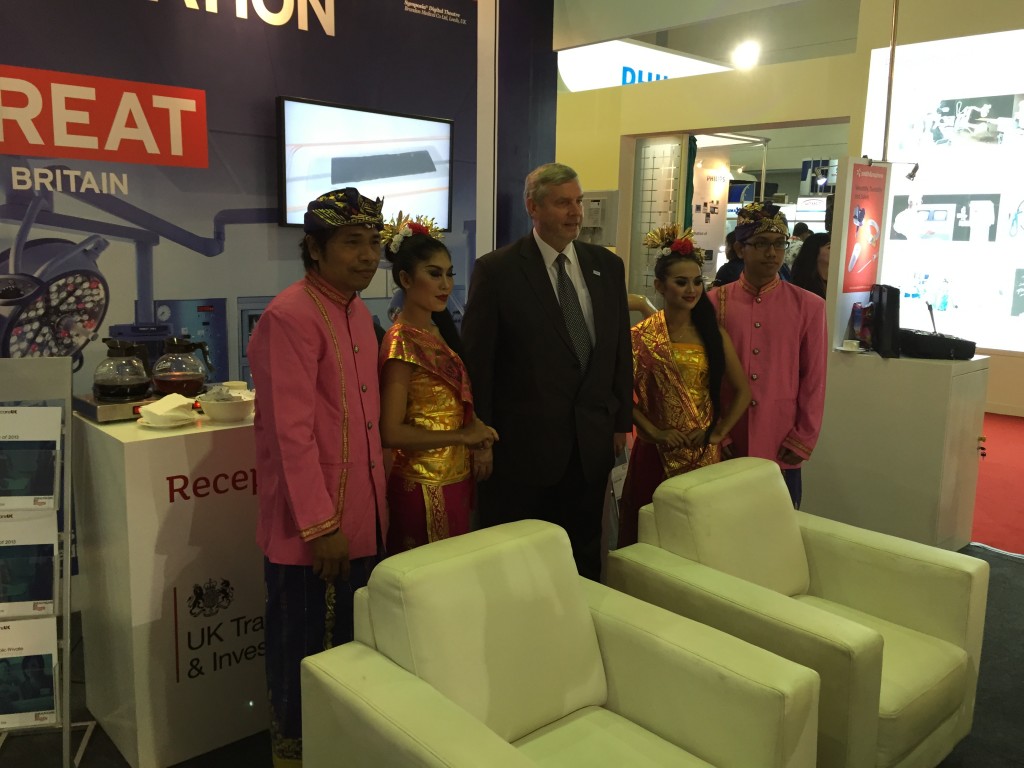 One of the most interesting experiences when travelling is to return to somewhere you haven’t visited in a while and see how it has changed.  Indonesia is the fourth most populous country on the planet, a rapidly growing and diversifying economy (the “I” in MINT) and has just introduced plans for universal access to healthcare for its population.  Which is why I was there: to talk about the UK’s approach to Universal Care and how we use technology, training, systems and our infrastructure to keep it affordable.

And Indonesia has changed.  For a start, my carefully preserved hoard of over 100,000 Rupiah was met with great interest by the knowledgeable and helpful staff at the British Embassy.  They had never seen notes of such small denomination but assured me that they were still legal tender even if they were worth much less than the taxi ride I’d have to take to the bank to exchange them!

The second thing was the palpable excitement about the future amongst the normally fatalist Indonesians preceding the inauguration of the new president which was taking place the following Monday.  Joko Widodo is the first Indonesian president not to come from an elite or military background and unsurprisingly both healthcare and education are high on his list of priorities.

While an economy growing at 7% per annum can provide some of the money required for healthcare reform, a real step change in services such as providing universal care will need “big” ideas and more money and the key sources for that will be reductions in the US$22Bn the government spends annually on subsiding fuel as well as targeting the 70% of Indonesians who smoke.

Previous attempts at reform in these areas have been met with country-wide protests but this time the government is planning a phased reduction in the fuel subsidy to control inflationary pressures combined with a campaign of mass information to show what Indonesians will gain from enhanced healthcare and social services.  This won’t be easy and to make it work the President will need to demonstrate quick wins and that, in turn, will require the insight that comes from experience.  This is where I believe the UK can help.

The core of my visit was an invitation to speak to an audience of about 300 senior clinicians and hospital directors at the 13th Indonesian Hospital Association National Seminar.

In a well-informed Q&A session afterwards it was clear that many were expecting a period of great change, but were keen to know what lessons the UK could provide.  One asked what advice I would give the new President and I said that I might politely suggest to the president that primary care is a good place to start. If there’s one aspect of universal healthcare the UK excels at, it’s in the system that makes family doctors and multi-disciplinary primary healthcare teams the first line of contact for around 90% of those who pass through the system, whether for treatment or – increasingly – prevention.

In private, many clinicians and administrators said they hoped to see a rise in the healthcare budget from its current levels of around 2% of GDP to around 10% over the next 5 years and while I doubt that is achievable, it is clear that expenditure will need to rise rapidly to meet expectations.

Reflecting this I also met with the directors of four large hospital groups to hear that they were already implementing ambitious plans for expansion, many funded by Indonesian investors.  There was a great interest in seeking clinical and management partners for these new facilities and a desire to use the situation to offer something more than is available from Singapore or Australia.

Many wanted to learn more about the way that the National Health Service provided its services so, together with the British Embassy, I intend to invite an influential group to come to the UK next year to see how we do it.  To learn more, keep an eye out for a future event on the UKTI events website.

As I left Jakarta, I wondered whether to spend my new stock of millions of Rupiah at the airport. But I didn’t. Perhaps I’m not learning my lesson about currency depreciation, but this time I suspect I’ll be coming back sooner.